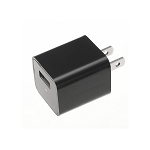 What is a Wireless Camera?

Wireless Security Cameras usually refers to standard cameras that have a built-in video transmitter and antenna but can also apply to Wi-Fi cameras. When power is applied the camera's video (and audio if so equipped) is sent wirelessly by radio waves to a receiver in the case of standard cameras or to a router in the case of Wi-Fi cameras. It should be noted that even a wireless camera will need power either in the form of a battery or power supply plugged into a standard electrical outlet. So the term wireless is not totally correct since it just means you do not need to run a video or audio cable from the camera to the receiver. The receiver when referring to standard cameras will receive this radio wave signal and turn it back into a standard composite video signal that will then be plugged into a monitor (which could be a standard TV) or some form of recording device like a digital video recorder. The Wi-Fi camera's signal is generally sent to a wireless router to be picked up by a smartphone or Network Video Recorder.

How Far Can Wireless Signals Transmit?

The range of the signals is usually stated based on line of sight. True line of sight means more than just the antenna of the transmitter can see the antenna of the receiver. The wireless signals using the standard omni-directional antennas will need about a 30 ft. diameter clearing between antennas for maximum range. So to get the maximum distance the transmitter and receiver antennas will need to be at least 15 feet off the ground otherwise the ground itself will attenuate the signal. This doesn't mean that the transmitter or receiver can't be on a 3 feet high shelf in your house but the lower it is placed and the more obstructions such as trees, bushes and buildings the less distance you can achieve. Metal and concrete are the hardest for the signals to penetrate. Through normal house construction of wood and drywall you will probably loose 15 to 20% through each wall the signal must pass for 2.4 GHz equipment.

What Can be Done to Get More Distance?

If you find you are getting a signal but it has lines or fades in and out try placing the receiver by a window or closer to an exterior wall and run a cable to your monitor or recording device. Also if your receiver has a detachable antenna you can buy extension cable and mount the antenna outside your building and run the cable through a hole much like is done for cable TV or through a window. This will eliminate the walls giving you better line of sight and greater signal distance. To keep signal loss at a minimum the shorter the antenna cable the better try not to exceed 15 to 25 feet. Greater signal distance can also be achieved by the use of high gain directional antennas. The antennas that normally come with most wireless cameras are omni-directional which are good for receiving signals from any direction. By using a high gain directional antenna the signal distance can be doubled or more depending on the dB gain. The drawback is that the antennas are larger, more expensive and must be pointed directly at each other and on the same axis (horizontal, vertical). However if wireless is the only way to get the signal the extra cost and size may be worth the investment.

Another factor that will affect distance is the frequency of the transmitter. The lower the frequency the greater penetrating ability. It is similar to standing outside a house or car with a stereo on, you can more easily hear the drum or bass sounds than the other instruments. For true line of sight with analog transmitters of the same power or amplitude signal the lower frequency will still have greater signal distance using the standard dipole antennas. When needing longer distance using high gain antennas the higher frequencies have the advantage of more gain from the same size antenna making 2.4 GHz better for long range high gain antenna situations. Another factor to consider is the bandwidth which is smaller in the lower frequencies limiting the number of channels that can be use in one location.

Will Other Wireless Devices Interfere with the Cameras?

When using wireless cameras and Wi-Fi cameras that operate in the 2.4 GHz range there can be interference problems from devices such as cordless phones, other wireless Internet routers and microwave ovens. Cell phones generally do not operate on the same frequencies and will not cause interference. Many devices like cordless phones and wireless routers allow you to select different frequencies for them to operate on that may not interfere with the cameras. 5.8 GHz has less interference due to the larger bandwidth but has less distance and penetration of walls due to the higher frequency. Unfortunately anytime you have a number of devices operating wirelessly at the same time interference is possible. Another option that can help is to use directional antennas on both the transmitter and receiving sides since their signals are then confined to a smaller area directly between them. We offer IP wireless panels for turning wired IP cameras into long range WiFi cameras. These are great for locations where a camera is desired but wiring is not possible or costly, however power is still required at the cameras location or within a couple hundred feet.

Can I Make Any Camera Wireless?

Many times its hard to find the right camera that is also wireless with a built-in transmitter. For these situations you may want to consider plugging the video output from the camera into a separate video transmitter which will send the video signal wirelessly to the included receiver plugged into your DVR or monitor. However most analog security cameras on the market today are progressive scan 1080p or above resolution. That type of camera resolution is not compatible with standard wireless video transmitters but the cameras usually have the ability to be set to standard analog which makes them compatible. While it's true you won't be transmitting the full 1080p signal you will be transmitting a 700TVL image which is still quite good and certainly better than no camera to catch what is happening.

Another option is to use IP cameras with wireless panels which essentially turns them into long range WI-Fi cameras. We carry some wireless IP panels that can send video over 2 miles line of sight and are outdoor rated so no extra enclosures are needed. They will require power at the cameras location or nearby but can also provide the PoE for the camera.