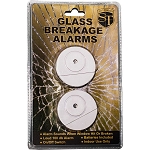 Posted by Mike Ward on 8/3/2010 to Home Security
Protecting your premises whether it is a house, yard, or business takes careful thought. A visible security system is a proven deterrent for thieves and vandals out to commit a crime. Often these common criminals are searching for a quick low risk hit and will move on to other locations after they see your area is being watched. Although this won't eliminate a crime it can protect you.

Surveillance cameras allow for visuals of a suspect which police can move on right away. This considerably increases the odds of catching the suspects. Home security systems are easy to setup and customize to anything your requirements might be. Most systems contain motion devices, lights, security video cameras, and a digital video recording device. Even though the cost of security devices has decreased in recent years they're nonetheless a significant yet worthwhile investment. The peace of mind knowing your possessions are being looked after is priceless.

If you are not really ready to install a full security system or it just isn’t feasible depending on your needs think about implementing several fake security cameras. Fake cameras area basically a real surveillance camera or camera housing that isn’t attached to any form of monitoring system. Most have the exact look of a actual security camera and are available in a number of sizes and styles. Expect to pay around $10 to $30 dollars a camera. They can be installed in a few minutes and provide a similar deterrent factor as an actual security camera, since burglars won’t be aware of the difference.

An effective camera will include flashing LED’s, real looking cables, in addition to an interior or exterior housing. Some fake cameras even have an automatic panning motion to give the look they are checking an area. They contain a motion sensor and panning capabilities. A static camera all of the sudden panning and blinking is enough to cause most criminals to look for an easier target.

Dummy security cameras can be an excellent choice for more remote regions of your premises or business, for example a parking area or fenced in supply lot. Blinking LED’s will ensure the camera is noticed. They can also bolster the presence of an existing system. Dummy cams can be upgraded at a later date if needed. Fake surveillance cameras create the impression of a fully functional security system. The bottom line is a crook simply won’t be capable of telling if the system is real or not, and likely will not take the chance.
Share |
Previous Post
Next Post