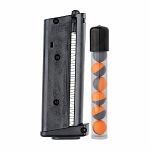 Pepper Spray For Self Defense

Posted by Ron Winkler on 3/9/2010 to Personal Security
Pepper spray has been in use for many years as a non-lethal weapon for use in self-defense. It comes in canisters small enough to be easily carried in a pocket or a purse and can even be made as part of a key-chain or a piece of jewelry. For self-defense, its function is to disable an attacker long enough to allow the victim to escape. It works well for this.

Police officers have long carried this or some other similar acting spray as part of their uniform dress, right next to their pistol. Using a spray rather than a bullet is sometimes the right choice, and cops like to have all the options available. There are instances where a spray will not completely disable the attacker, but this is rare. Usually it's effective at doing the job.

The name 'pepper' comes from the main ingredient, capsicum, which is derived from the fruit of certain pepper plants. The capsicum is extracted using a solvent such as ethanol. The solvent is then evaporated and the remaining waxy substance, called oleoresin capsicum, is emulsified with polypropylene glycol (anti-freeze) so it can be suspended in water and pressurized into aerosol form. Capsicum is also made into ammunition used to shoot out of paintball guns to for use non-lethal riot control. It's also very effective in this application.

Pepper spray is a lachrymatory agent. This means is will affect the eyes, causing tears, pain, and even temporary blindness. Getting hit in the face with this spray is not a pleasant experience, but certainly preferred to taking a 9mm or 45 caliber bullet. The spray is advertised as non-lethal. This isn't to say that deaths have not occurred in some circumstances as a direct or indirect result of of a capsicum spray being used.

Pepper spray is an inflammatory agent and causes an immediate reaction in the form of coughing, runny nose, difficultly breathing and painful, burning eyes that forced shut. These effects will usually last for a half hour or more, with residual effects sometimes lasting many hours more. Some suspects will exhibit less willingness to succumb to the effects of being sprayed with pepper gas, but it's rare. Usually these are the ones really high on amphetamines.

Here's some good advice. Try not to ever get sprayed with this stuff. It's a bummer. If you're in a crowd where it's being used by police to control a demonstration or riot, cover your mouth and eyes and try to stay upwind. Then get out of there!

Pepper spray is banned for use in war, which sounds pretty funny, really, but there are conventions of war that disallow any use of riot control agents whether lethal or non-lethal. Laws for non-war use vary from country to country. In Hong Kong, it's classified as a 'firearm' and requires a permit to carry. India doesn't require a permit, but doesn't allow it to be sold over the counter and allows it to be only used in the act of self-defense. In the US, laws vary according to each state.

Pepper spray is a good deterrent. Every woman should have a can in her purse, just in case. It's better to have it and not need it than to need it and not have it. Think about it.
Share |
Previous Post